We typically understand the proton as being described as a bound state of three valence quarks, held together by the strong nuclear force of Quantum Chromodynamics (QCD). However, once quarks are appreciated as sources and sinks for the radiation quanta of the strong force, namely gluons, it is clear that such an image of the proton must evolve with energy. In particular, the dramatic proliferation of soft gluon radiation with increasing collision energy, as witnessed by the rapid rise of the gluon distribution function inside the proton, eventually leads to a new state of matter called the Color Glass Condensate (CGC). 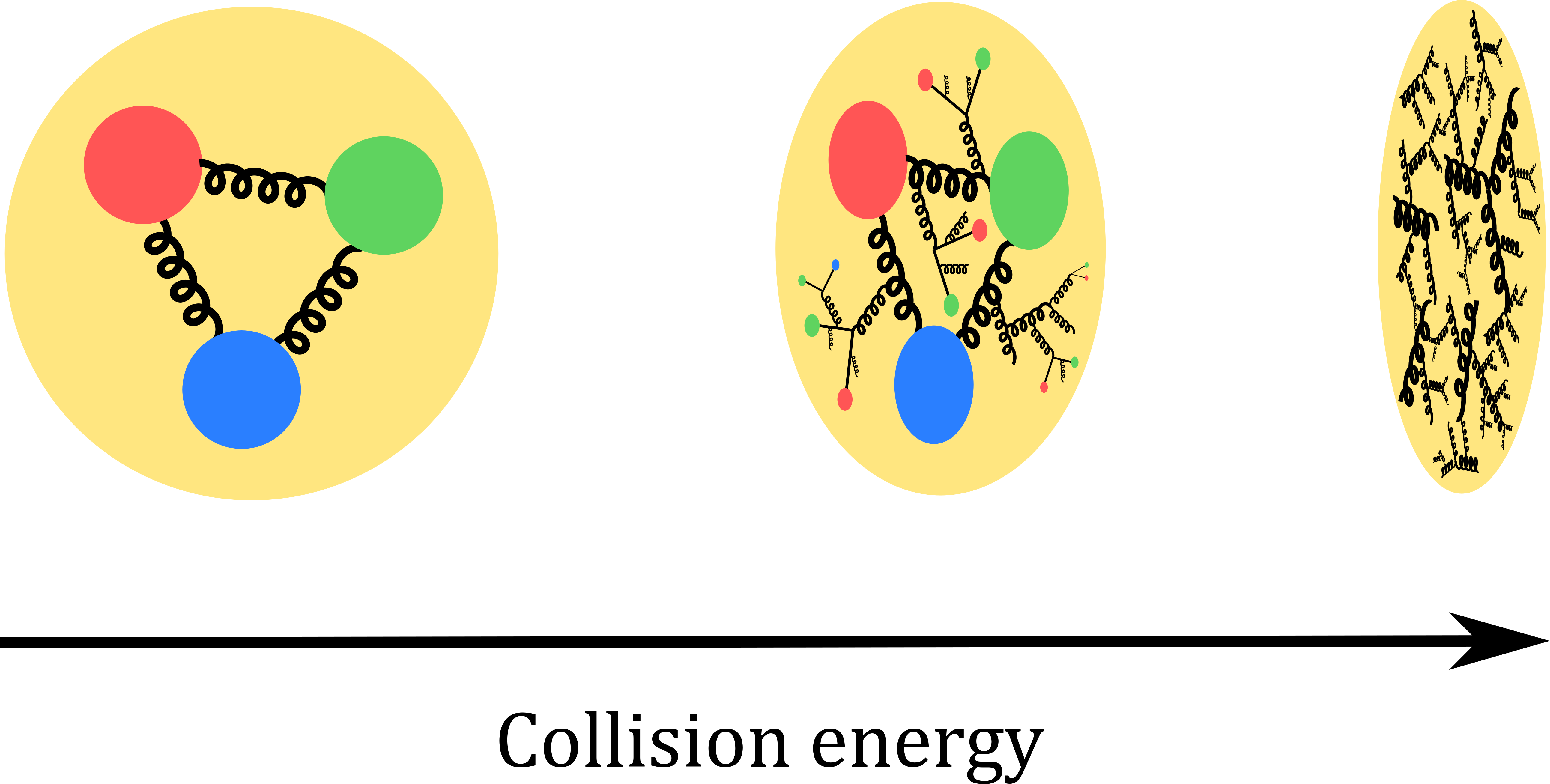 There is a firm basis in QCD that all hadrons, be it nucleons or nuclei, participating in high energy collisions, universally reach this ultimate state of matter. Emergent in this approach is a new dynamical scale, proportional to this ultimate gluon occupancy in the proton, called the saturation scale. All CGC cross sections should ultimately scale with the saturation scale at high energies. Whether this is actually achieved in Nature, under which kinematic conditions, and to what extent it can be observed in the experiment is a matter of present day research in the highest energy accelerators in the world, such as the Relativistic Heavy Ion Collider (RHIC) at Brookhaven National Laboratory and the Large Hadron Collider (LHC) at CERN. Due to the sheer number of color sources in the nuclei, as opposed to the nucleon, the CGC effects are first expected to be seen in energetic collisions off nuclei. Moreover, theoretical foundations are under better control, as the saturation scale enters the semi-hard region. These elements eventually become a driving force for the future Electron-Ion Collider (EIC) to be built in the USA and in China.

The main observables are single and/or multi-particle cross sections, where in the latter case one typically considers various kinematic correlations between pairs of particles. The typical CGC effects on the cross sections include suppression of the cross section (compared to its pQCD counterparts), due to e. g. shadowing (merging of two gluons from different nucleons), or anti-shadowing (Cronin peak – multiple-scattering effect), decoherence of the back-to-back correlations in the azimuthal angle and so on. So far, there is no strict experimental verification of CGC - presently running RHIC and the LHC colliders do reveal some hints of CGC, but alternative (that is, non-CGC) explanations provide an equally good description. The degeneracy of CGC and non-CGC based explanations of the collider data can be solved by considering new observables and this is one of the goals of this project. For this we suggest to use photons and dileptons – as clean probes, they are a perfect new window into CGC physics.

Intimately related is the question of the structure of the polarized proton. Protons axis of spin can point parallel (longitudinal) or perpendicular (transverse) to its direction of motion. The main observables are cross section asymmetries, measuring the difference between particles produced on the left and on the right of the collision axis. Transverse spin physics is especially interesting as it is accompanied by a helicity flip, which is a pre-requisite for chiral symmetry breaking in QCD. Precisely for this reason it was initially argued that, as the explicit chiral symmetry breaking, coming from the current quark masses, is small, the physical effects contained in the asymmetries must be small as well. This has been proven wrong with collisions of either electrons or protons off a transversely polarized proton target, that have been (already from the 1970s) consistently measuring asymmetries as large as few tens of a percent. The modern perspective on this problem shifted completely, pointing to dynamical chiral symmetry breaking, that is contained in the non-perturbative matrix element responsible for the long-distance component of the cross section. 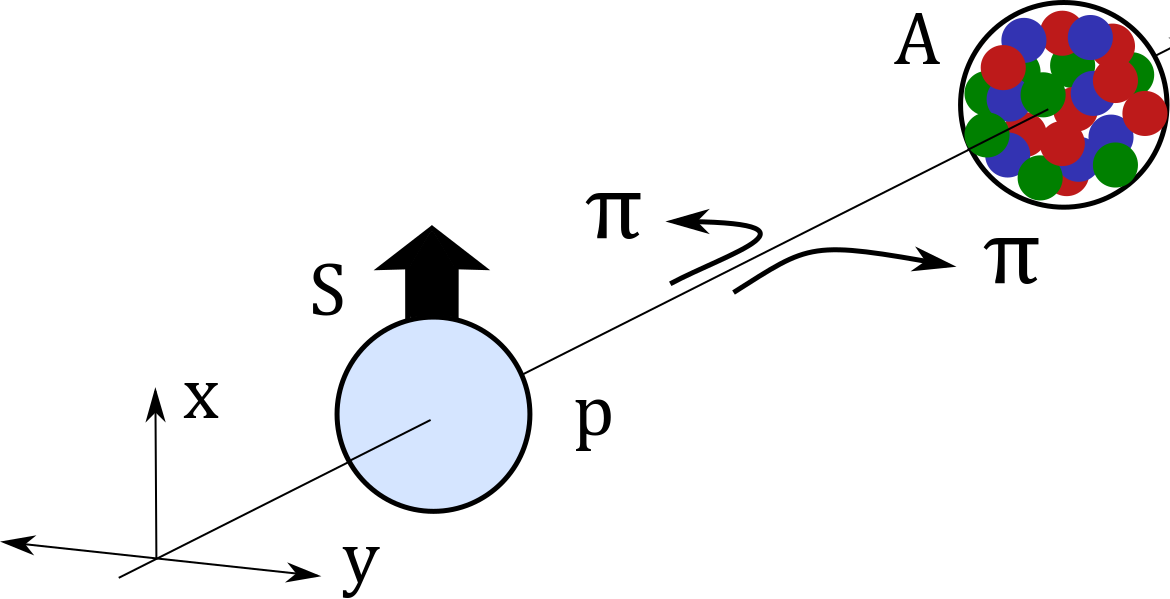 The main mystery is, what is the matrix element responsible for the measured huge spin asymmetries? Is it a single contribution or a combination of several possible contributions, spanning which kinematics? Several mechanisms have been proposed in the literature, the initial state, or the Sivers mechanism, wherein a polarized proton target emits an unpolarized quark, but with an asymmetric distribution in transverse momentum space, the so-called Sivers function. Interacting with the parton from the projectile, the asymmetry in the distribution of the target parton transfers into an asymmetry for hadron production in the final state. Closely related effect in twist-3 collinear QCD is the Efremov-Teryaev-Qiu-Sterman (ETQS) effect. Another, independent source of SSA is the Collins effect, where the polarized proton emits a polarized quark. Interacting with the projectile parton we find a parton in the final state with a preferred polarization. Then the so-called Collins fragmentation function is invoked that couples polarization with an asymmetric transverse momentum dependence in the produced hadron. The collinear QCD counterpart is the twist-3 fragmentation function mechanism. Some recent analysis of p+p data points to the twist-3 fragmentation function as the main contribution, but more work is needed.

Very recent measurements of SSA in polarized proton and unpolarized nucleus collisions at RHIC sparked a lot of interest. This is the crossroads where transverse spin physics meets saturation physics, and so a mutual progress in both fields is expected. The idea is that different sources of SSA may carry different nuclear dependence and so the individual contributions may be resolved in polarized p+A. This also motivates the investigations of possible new sources for SSA, which is another goal of this project.