Current seismicity of the Mt. Velebit area is significantly lower than that of the neighbouring regions, the fact not yet properly understood or explained within the local/regional seismotectonic framework. There are indications that the present-day low seismicity is a consequence of temporary seismic quiescence rather than being a long-term property of this area. Low rate of generation of strong earthquakes as inferred from the catalogues is reflected in seismic hazard maps that show a deep local hazard minimum in the Mt. Velebit region (including the mountain itself and parts of the NW Adriatic archipelago and the Lika province). Should it turn out that hazard there is underestimated it would have profound consequences for development and environmental planning, construction, etc. In addition, the geometrical and other features of the local seismic sources, anisotropy, attenuation of seismic waves and macroseismic intensity, as well as the spatial velocity distributions are all largely unknown...

The proposed research therefore aims at securing high-quality data for thorough and multidisciplinary study of seismicity, local geology and tectonics, as well as inversion of physical properties of the crust and upper mantle in the Mt. Velebit area. In particular, our plan includes:

Currently, the density of seismological stations (Fig. b1) is much too low to ensure reliable location of hypocentres, especially for events with magnitudes below about M = 2.8. The accuracy of the hypocentral depth critically depends on the network configuration and station density. Taking the rules of the call and possible finances into account, we believe that we should be able to purchase equipment for 3 new stations. Adding two more stations using the existing equipment, we propose the Velebit-net to consist of the four existing stations (KSY, NVLJ, SLUN, UDBI), and 5–6 new ones (S1–S6) (see Fig. b1). In addition we shall also have unlimited access to data from other nearby regional stations from Croatia, as well as Slovenia and Italy, as Croatia (Department of Geophysics, Zagreb) was invited to join the regional C3ERN virtual network (Italy, Slovenia, Austria). 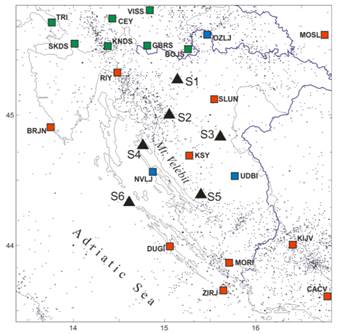 Numerical exercise with synthetic traveltimes performed under assumption of configuration as shown in Fig. b1, shows that focal depths in the range 5–20 km (which is typical for the region) of events within the network are inverted with standard errors ranging from 1.5 to 4.5 km, depending on the number of read onset-times for Pg and Sg phases and the proximity of the closest station. Assumed error in onset times was randomly taken from the interval [–0.5 s, +0.5 s] which covers both reading errors and travel-time forward modelling errors. Accuracy of horizontal coordinates is almost an order of magnitude better. If achieved, such accuracy should considerably improve locations of earthquakes in the Velebit area, and would hopefully provide valuable information of positions of seismogenic faults. We also intend to improve velocity models and to use spatially-distributed, phase-dependent station corrections in earthquake location procedure (see below), which should improve absolute precision of locations.

Configuration as proposed in Fig. b1 should also enable constructing 2-D profiles of inverted structures using receiver-function based techniques (e.g. along profiles S6–NVLJ–S4–S2–S1–BOJS–OZLJ; DUGI–S5–KSY–S3–SLUN; ZIRJ–MORI–S5–KSY–S2–S1–BOJS–GBRS–VISS; see below). It should also warrant adequate ray coverage of the greater study area for ambient-noise tomographic investigations (see below).

Relocation of foci of past earthquakes using improved velocity models together with location methods using spatially variable station corrections (see below) is expected to yield better constrained locations of hypocentres, thus providing improved insight into the position and geometry of seismogenic sources.

Important part of this study is to provide insight into the deeper parts of the crust and lithosphere under larger Mt. Velebit area. One of the key questions is about the possible link between the apparent seismic gap and the low velocity anomaly in the upper mantle as imaged by the regional teleseismic tomography. The link between the geodynamic processes in the upper mantle and the tectonic evolution of this area has been elusive so far but we hope that this study will be the first stepping-stone towards reconciliations of deep and shallow processes. In an attempt to elucidate subsurface of the Mt. Velebit area we will use several well established methods in order to probe and map structures up to 60 km depth. Furthermore, combination of several methods (receiver function, ambient noise tomography, seismic wave attenuation and anisotropy) each sensitive to different part of seismic structure should enable us to achieve high resolution and to resolve subsurface structures in depth of several kilometres.

Ambient noise tomography will provide the estimate of the crustal shear wave structure up to 25 km depth and will act as constraint in the probing of lower crust and lithosphere via receiver function inversion. As the RFs analysis provides very potent way of mapping subsurface velocity gradients our aim is to locate all the major discontinuities in the crust, make detailed map of the crustal thickness in the area and detect possible discontinuities in the lithosphere.

Re-evaluation of all available FPS so far and computation of new ones for smaller events using data from the dense Velebit-Net and other available networks will result in more detailed knowledge of the faulting mechanisms and their spatial variation. It will also provide additional valuable data on the tectonic stress field, which is important for seismotectonic modelling.

New stations will provide quality data for attenuation study of coda waves and body waves. As coda waves carry information on the attenuation properties both from crust and mantle, and local direct body waves sample only the upper crust, a combination of two methods should yield better attenuation profiles and more realistic Q-values for P- and S-waves, which may be used to reduce observed spectra back to the source in the course of computation of moment magnitudes by spectral methods. We also intend to study azimuthal anisotropy of attenuation (using the coda-normalization method) in order to explain observed pronouncedly elongated isoseismals. Velocity anisotropy studies using SKS splitting will be performed if enough teleseismic earthquakes from the right distance range would be recorded with adequate s/n ratio (SNR) and providing good azimuthal coverage. The same holds for crustal anisotropy – should we collect enough data from sources within the Velebit-net, a Pg- and Sg-velocity anisotropy estimation will be attempted. All these information will also help in comparing the Mt. Velebit and adjacent areas.

Hopefully, all collected data will considerably improve our knowledge on seismological, structural, and seismotectonic properties of the Velebit region. In particular, we expect to answer some, and get closer to answering the rest of the following questions: